Wait, Now is the Crucial Moment for Your Congregation? 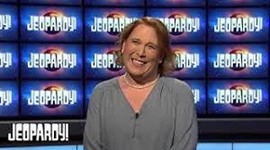 Maybe it’s the need for distraction as the pandemic stretches on, or perhaps it’s all those recent winning streaks, but the TV game show Jeopardy is receiving renewed cultural attention.  Since mid-summer, two contestants – Matt Amodio and Amy Schneider (pictured to the left) – have achieved winning streaks of 30+ games, placing Amodio third and Schneider second on the list of all-time Jeopardy game winners.

Watching Amy Schneider’s 40-game streak from beginning to end got us thinking about the importance of seizing the moment.

First to beginnings. Given Schneider’s command of board and buzzer for 40 games straight, it is hard to conceive that she barely made it past Game One. Going into Final Jeopardy in her first appearance, Schneider was down by seven thousand dollars to 5-day champion Andrew He. Had the champion answered the Final Jeopardy question correctly, Schneider’s run would have ended there, and we would not even know her name today.

One correct response, coming from behind.  Moments like that and opportunity suddenly opens.

Now to endings. When Schneider finally lost 8 weeks later, it was mainly because one of her competitors understood the power of seizing the moment.

The game of Jeopardy contains three “Double Jeopardy” clues, in which the person who calls that clue can wager up to double their current winnings.  Previously, when Amy’s competition had gotten a Double Jeopardy clue, what did most of them do? Often, they just bet a small amount, so that, even if they answered correctly, they were still far behind.

We can imagine the thoughts of these competitors.

Well, I want to stay close, but I don’t want to risk too much, because what if I lose?

I’ll wait for deeper into the game to really wager more.

This isn’t the moment I prepared for…

Win or lose their small wagers, those competitors were never heard from again.  By contrast, the person who finally defeated Amy Schneider wagered all he had each time he could, including a bet that could have eliminated him from serious competition within minutes of starting the game.  He knew his “moment” was at hand, even if it was not of his own planning.

Look, no one chose this moment (as we enter year 3 of a pandemic) to be the point at which your congregation needs to define itself anew and reintroduce itself to the community.  Pastors are exhausted, church boards are filled with uncertainty and anxiety in equal measure, and church participants are so stressed by competing needs that it’s hard to know where to start in addressing them.  There is a strong mood within and across congregations just to wait—wait until things are better, things are clearer, the pandemic is behind us, our resources are firmed up, or we all get some rest.

We can always make a case for more rest, more time to prepare, a delay in moving forward until things are clearer.  Except scripture doesn’t offer that way forward when God’s activity – and our invitation to join God – is the topic at hand.

God appears to Jeremiah and calls him.  Jeremiah responds, “I am only a boy.” To which God responds, in effect, “That is not an issue, now go….”

Mary is visited by the angel and told she is to bear a son and call him Jesus. Mary’s initial response is, “Who am I that the Lord has come to me?”  And, ready or not, Mary follows where God leads.

The disciples were called in the midst of their work weeks and “left everything and followed Jesus.” Presumably, that was not their life plan nor their plan for the day when Jesus showed up and disrupted the rest of their lives.  No preparation.  No well-timed exit from a life of fishing.  Just…follow me.

Life is not a game show and neither is ministry.  However, if we see ministry as building a well-planned move to the next opportunity – one when we are well-rested and well-resourced – we will miss countless opportunities.  A window opens suddenly and we are surprised and caught unprepared – but THIS – right here, right now – THIS is the moment to follow God deeper into hope and faith and justice and love.  We follow, trusting that God always has – and always will – provide what we need along the way.

When in your life have you seized the moment, regardless of the timing or your preparation? What did you risk? What came from it? Why do you remember it now?

When in the life of your congregation have you seized the moment, regardless of the timing and your readiness? What did you risk? What came from it?

What are you noticing about this moment in the life of your congregation? What are its qualities? What is it calling you to do or become as a church?