Keeping Our Eye On…?

We once met a woman, well into her 80’s and confined to a wheelchair, in a nursing home. On the wall opposite her was a print of Andrew’s Wyeth’s painting, “Christina’s World.”  Asked how she was doing, the woman pointed at the frame and said flatly, “This is who I am.”

According to the Museum of Modern Art, where “Christina’s World” is on display, the painting was inspired by Wyeth’s neighbor Anna Christina Olson. As a young girl, Olson developed a degenerative muscle condition—possibly polio—that left her unable to walk. She refused to use a wheelchair, preferring to crawl, as depicted here, using her arms to drag her lower body along. “The challenge to me,” Wyeth explained, “was to do justice to her extraordinary conquest of a life which most people would consider hopeless.” 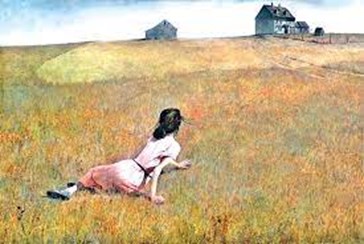 Yet, in the context of that nursing home, our older friend understandably took a different message from “Christina’s World.” She saw in it her own fixed and limited world, and her inability to move or change her view.

In a poem titled Change, published by Poetry Magazine in 1936, the (apparently otherwise unnoticed) poet Betty Phillips describes two views – one out toward the open sea, and the other inward toward the village.

She had a window looking out to sea,

But liking better one that looked away

Across the land to where the village lay,

She closed the shutters. Something was too free

In what she saw, for her unchanging mind.

The cliffs, and breakers, and the shifting sky,

(to one who loved a glowing fire) the cry

But now with this great thunder in her head,

She felt a sudden need of alien sight

And opened the stiff shutters. Then the light

Of the grey sea came in. Something was dead

That loved the fire and chose the village view;

To her the sea was wonderful and new,

Your church board almost surely struggles with vision.  Do you focus on the dying boiler or the emerging neighborhood outside the church building?  Do you train your attention on the small, vocal group that wants to keep “stiff shutters” closed to the open sea, or do you engage the other perhaps less vocal group that yearns for something “wonderful and new?”

Outside occasional formal planning, church boards rarely talk about vision – theirs, let alone God’s.  Please spend more time on vision.  Proverbs famously offers that, “without vision, the people perish.”  But even more relevant is this passage from Revelation, and the promise God makes to us if we lift our eyes and un-shutter our view:

Then I saw a new heaven and a new earth; for the first heaven and the first earth had passed away, and the sea was no more. 2 And I saw the holy city, the new Jerusalem, coming down out of heaven from God, prepared as a bride adorned for her husband. 3 And I heard a loud voice from the throne saying,

“See, the home of God is among mortals.
God will dwell
with them;
they will be God’s people,
and Godself will be with them;
4 God will wipe every tear from their eyes.
Death will be no more;
mourning and crying and pain will be no more,
for the first things have passed away.”  (Revelation 21:1-4)

With vision comes comfort, God’s presence, the drying of tears, and life itself.  And perhaps, the ability to keep the church on the move.

What message have you taken from “Christina’s World” in the past? What led you to that view?

Why does the narrator in Phillips’ poem open the shutters to the sea?

Can you think of times, in your life as a congregation, when you suddenly moved to open shutters previously closed? What made that possible? What was the result?

What shutters are open, and closed, in your congregation today?