Two weeks ago, Adam Borneman opened up the idea of road signs and ministry. We’re going to follow this fruitful idea for the next several weeks.

“WATCH FOR FALLING ROCK.” If you drive in the Rocky Mountains, you will certainly see this road sign. From the standpoint of the church it speaks to all those things outside the church that are going on in our nation and world. And we need to watch for them. To pay attention. That is the world to whom our ministry is aimed. You can run a nice, tight ship. You can realize you can’t go backward. You can merge or keep moving. But if the church is not paying attention to the falling rocks, it is not fulfilling the mission of Jesus Christ.

That is to say that if the church gets so caught up in the business of running a church – whatever the road signs it encounters, heeds or ignores – it is missing the point. 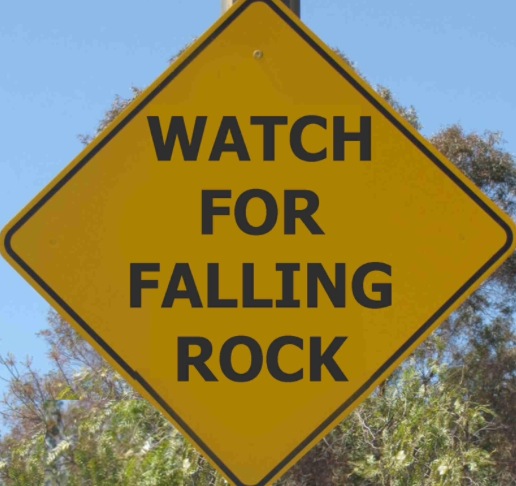 The falling rocks may be another police shooting of an unarmed black man, or a mass shooting (just since the shooting at Marjory Stoneman Douglass, the year anniversary of which we observed last week, there has been nearly one mass shooting a day), or debate on a wall between the US and Mexico, or, food insecurity in our own neighborhood.

You get my drift. If the church is not watching for falling rocks and responding in love and alternative witness to the destructive forces out on the road, it is not being the church of Jesus Christ – the One who came that we all might have life abundant.