Posted on April 4, 2017 in Recent News
Authored by Macedonian Ministry 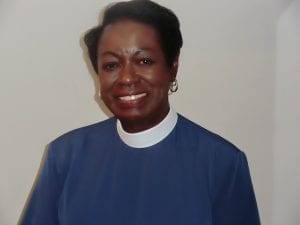 I began my process for ordination in the Episcopal Church at St. Gabriel’s Episcopal Church. There was a lot of turmoil and upheaval during that time in the national church and in our diocese. Our diocese was hit especially hard when several churches decided to leave the denomination. I got caught up in this upheaval by being moved around to different churches. I was moved from St. Gabriel’s to the Church of the Nativity. Both of those churches recognized their patronal celebration as centered on the birth of Jesus. According to two of the gospels, there was anticipation among the people for the coming of the long awaited Messiah. At the appointed time, heaven came down to earth and the angels announced the good news of great joy. Emmanuel had arrived. The shepherds obeyed and left to seek the newborn child. Who does not like a cute and cuddly little baby? The birth of a child in any family usually brings the family together in joyful celebration.

As the turmoil deepened in our diocese, the members of the Church of the Nativity decided to leave the denomination. I was then moved to Resurrection Episcopal Church. This time of turmoil had me filled with anxiety and fear about the future of our denomination. I remember this as the darkest time of my life as an Episcopalian. With that darkness in mind, I remember thinking that my move from Nativity to Resurrection meant that I was being moved from life to death or from the beginning to the end. The reality was that the depth of my despair clouded my thinking.

A week after I arrived at my new location we began the penitential season of Lent. There was no joyful anticipation here. Instead we resorted to somber music and no expressions of joy such as the ‘alleluia’. Jesus had warned his friend that he was going to die and rise again on the third day. When he said he was leaving them, he was asked where are you going? We don’t know the way. But they did not clearly understand what he was saying. The Bible describes some people who were resuscitated but those persons eventually died again. All we know about death is that you die and no longer exist on the earth. Scripture tells that that the events leading to the Resurrection were shrouded in fear and anxiety. People deserted the Messiah. The Resurrection came amid darkness, grief, despair and loss. It came when God appeared to have deserted the followers of Jesus.

It took me a while to absorb what the name of my new church represented. In looking back at the history of the church I found that the church was created when two other churches dissolved, folded or died. It was decided to combine the few parishioners who were left in both church and to form a totally new church with a new identity and new hope for survival. The new identity told others that our church was not resuscitated but had risen to new life. I began to understand the deeper meaning of the Resurrection. I have been able to appreciate the fact that the Resurrection displays the profound and genuine love of God for each one of us. It shows us a love that is not passive but is so active that God gave His precious Son for our redemption. The Resurrection represents a victory not a defeat. We have the empty tomb to prove it! As Paul told the Corinthians in his first letter to them (1 Corinthians 15), we are wasting our time preaching if the Resurrection is not true. He added that there were thousands of witnesses who saw the risen Lord.

The good news is that Jesus’ resurrection gives us hope. Hope for those who have lost a loved one and hope for the future of our own lives. It provides hope that life has not ended but continues. We have hope in this mystery that is a miracle. We have hope that “all believers will be raised incorruptible, empowered and never to die again” (1Corinthians 15:40-43).