My husband Josiah, a cheerful, relational sort of person, loves to comment on “that good old Nakamura pessimism.”  I, of course, prefer to think of myself as a realist than a pessimist… but I’ll definitely own up to being a “prepper.”  Not quite to the extent as they went on that T.V. show a few years ago.  But I can drive others crazy (or make them laugh out loud) when I get going on the future of the Church, the planet, or anything else.

So here it goes: 30 years from now is going to be a really decisive moment, and we should be getting ready now!

Three major paradigm shifts affecting my world are destined to collide around the year 2050.

First, and maybe most well known and consequential, is that 2050 is the year by which the International Panel on Climate Change says we’ve got to cut carbon emissions to ‘net zero.’

Second, 2050 is around the time there will statistically be no one left in worship in my entire denomination (the Episcopal Church).  Projections are a bit sooner for some denominations and later for others, but there’s a fairly consistent trend of decline across the Mainline.

The first, of course, reflects a truly existential crisis. Surely we can do our part now, by preaching love and care of God’s creation, modeling good stewardship of resources and advocating for policies that will help do both. But, in addition, remember that the spaces we build now, and the young leaders we’re currently raising up, will be the ones serving the Church in 2050. What seeds can we be planting now that will blossom then?

The second and third shifts are intimately connected.  My denomination is largely led and attended by older, White, affluent people.  As demographics shift, the religious culture of America changes and Mainline churches decline, we will pass on our buildings, traditions and endowments to the next people who will use them.  This isn’t a choice.  It will happen with or without our cooperation.  The church will not die, but it will be reshaped and re-peopled.

The “re-peopling” of the church, as my friend Fred Vergara calls it, is an inevitable process that has been going on for millennia.   We could say it started on the Day of Pentecost, with the full inclusion of the Gentiles and the Holy Spirit’s insistence that the Good News be preached in local languages.  It has continued in every place across the globe where people have, through the person of Christ, come to see themselves reflected in the Divine and recrafted worship, polity and tradition for the sake of love.

We might be afraid that future followers of Jesus will “mess things up,” especially if we sense that they may not look like us, and may not value the same things we value.  If “messing things up” means “change things,” then the answer is, yes, they probably will.  What does it take for long-time church members to be at peace with that?

One of the most gracious churches I’ve visited recently is a historically Black parish in South Alabama.  The members there know their own community is in decline, and they’ve welcomed a congregation of Spanish speaking immigrants from Mexico to share their century-old building.  I noticed a six foot tall icon of La Virgen de Guadalupe leaning prominently against the wall to the left of the altar.  Having experienced church decor to cause much strife, I asked the priest if the presence of the icon had created any controversy between the host parish and the Latino congregation.  “Nope,” she replied.  “They all know that their future is bound in their ability to be in relationship with each other and share this sacred space.”

So, what can we do today to prep for that future?

I want us to become intentional about raising up leaders who can shepherd the multicultural church.  We can begin by seeking those who have been doing this kind of cultural adaptation their whole lives – the children and grandchildren of non-white immigrants, third culture kids, and people who for other reasons have never quite felt “on the inside.”  I hope to see more new church plants, which often garner excitement and reach different populations than are in our existing parishes.  But, of I course, all this starts with a fresh and honest look outside the walls of our current church buildings and asking the Gospel of Luke’s ageless question, “And who is my neighbor?”

So, how do we make the most of the current moment, the Church’s rich history, and clues to the future, to become ready for what the Spirit gets up to next? 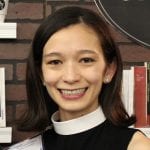 The Ministry Collaborative welcomes pastors from throughout our program and broadening network to contribute to our weekly articles. This week, our thanks to The Rev. Katie Nakamura Rengers, Presiding Bishop’s Staff Officer for Church Planting, Birmingham, AL.