No Roof and No Walls

Posted on May 21, 2019 in Blog, Ministry Leadership Articles
Authored by Macedonian Ministry 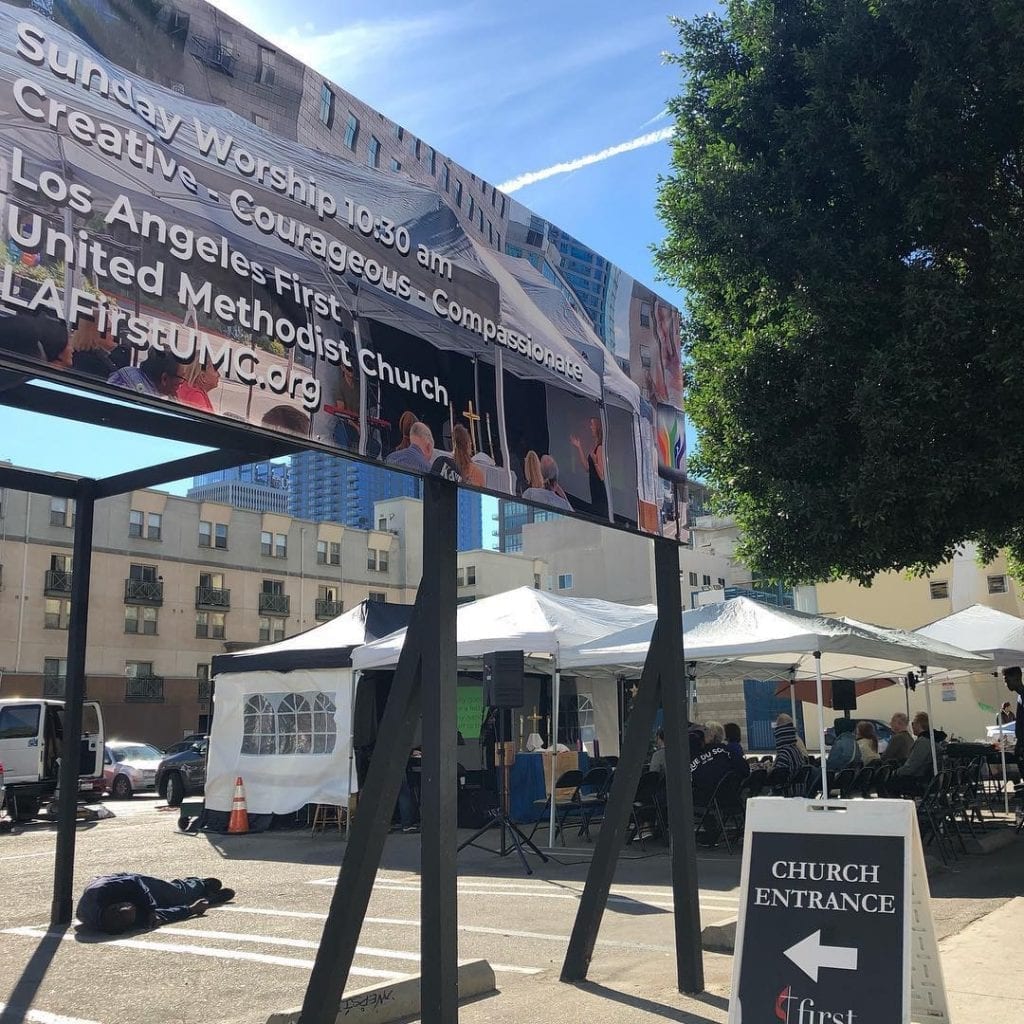 “At this church no borders divide. No walls exclude.” So reads the website of First United Methodist Church of Los Angeles. The words are apt because the church meets in a parking lot. Started in 1853 as the first Protestant church in the city, First United Methodist Church once boasted 6000 members but as people moved out to the suburbs in the 1970s, the membership dwindled. In the 1990s the church made the decision to sell their over-sized buildings and build low-income housing on the property leaving the church with only a parking lot. They met for worship on Sundays in a community room in one of the housing complexes until two years ago when, on her first Sunday, the Rev. Mandy Sloan McDow invited the worshippers to grab paraments, the cross, candles, the Bible and head to the parking lot. They’ve been meeting in the parking lot ever since.

The highly visible space on the corner of Olympic and Flower very much mirrors the neighborhood where homelessness is rampant, and people live outside much of the time. It’s a gritty space; Mandy has to stop preaching every time a Harley roars by and people wander through the parking lot all through the worship service. The border between the neighborhood and the worshipping community is non-existent. The church serves a hearty lunch every Sunday after worship which is shared by church members and neighborhood folk alike. No distinction is made between members and non-members as the church embraces its location and its neighbors. Last Christmas they were the site of the only Nativity Scene in downtown LA installing an open-air piece of art by a local artist depicting Mary as a pregnant homeless woman in search of shelter.

When not in use for worship, the parking lot provides a lucrative source of income for the church as they rent it out for parking, catering to the parking needs of the nearby Staples Center. In a city where parking is at a premium the parking lot funds the work of the church.

What could be seen as a liability – not having a building – is, on the contrary, considered an asset and representative of the church’s theology. As one member put it, “We remain a church without walls, without barriers. It reflects our theological openness and the way we believe God’s love should be experienced and shared.”

In Jayber Crow, Wendell Berry writes, “As I have read the Gospels over the years, the belief has grown in me that Christ did not come to found an organized religion but came instead to found an unorganized one. He seems to have come to carry religion out of the temples into the fields and sheep pastures, onto the roadsides and the banks of the rivers, into the houses of sinners and publicans, into the town and the wilderness, toward the membership of all that is here.”