Posted on May 31, 2022 in Blog, Ministry Leadership Articles
Authored by Ryan Bonfiglio 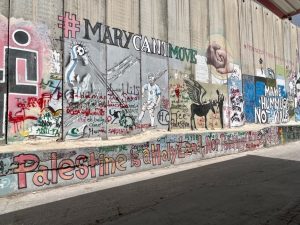 Photo of the Wall, with protest art. Just outside of Wi’am in Bethlehem.

How can pastors work to heal the tattered social fabric of their communities?

I’ve been thinking a lot about this question since recently returning from a trip to Israel-Palestine with two Ministry Collaborative cohorts. While there, we spent time in the Galilee and Jerusalem having meaningful conversations as we walked where Jesus once walked. But unlike most Holy Land tours, we also spent several days in Bethlehem.

There we visited an incredible organization called Wi’am, which is a Palestinian Christian conflict transformation center. Situated in the shadow of the Wall that separates the West Bank from Israel, Wi’am exists to empower children, youth, women, and men by addressing the psychological, emotional, and social consequences of long-term conflict. The mission of Wi’am is embedded in its name, which in Arabic means “harmonious relationships” and is the rough equivalent of the Greek word agape.

We spent several hours sipping strong coffee and listening to the director of Wi’am, a man named Zoughbi, and his son Tarek. They told heartbreaking stories of the effects of ongoing violence and occupation. From crippling unemployment and the marginalization of women to the separation of families and the anxiety that comes from living in the most tear-gassed neighborhood in the world, almost every aspect of life in Bethlehem has been torn asunder.

If anyone would be justified in thinking that the social fabric of a community was beyond repair, it would be Zoughbi and Tarek. And yet, these two men were the most fiercely resilient and audaciously hopeful people I have ever encountered. There were three things they shared that I just can’t let go.

First, they insisted that their goal was “not to bring the powerful to their knees but rather to their senses.” They, like the prophet Nathan long before them, realize that true transformation can only happen when the powerful come to see and be outraged by their own injustice. This rarely happens through angry castigation and censure shouted from afar; it happens through the risky and painful process of being in close, authentic relationship with the very people we disagree with and who have hurt us. Zoughbi and Tarek live this risk every day. Do we?

Second, Zoughbi and Tarek repeatedly stressed that the harm inflicted upon Palestinians by Israelis is a symptom of the unhealed trauma of the Holocaust and antisemitism more broadly. In making this point, they were not equivocating on the matter of justice, and they certainly weren’t condoning what’s happening on the ground in places like Bethlehem. But they are committed to seeing injustice through the eyes of empathy. They recognize, as the saying goes, that “hurt people hurt people.” They are convinced that the liberation of the Palestinians is tied up in the liberation of the Israelis. Can we, too, see through the eyes of empathy and recognize that most forms of hate and violence are projections of previous wounds and trauma? Will we only denounce the violence or are we willing to work for the transformation of the systems that have inflicted harm on those harming others?

Third, near the end of our conversation someone from our group asked Zoughbi and Tarek if they had any reason to be hopeful. They said, “No – there is absolutely no reason to hope. Not for political solutions or social progress. We would have no hope…if it were not for Jesus.”

If it were not for Jesus.

That Jesus was born just a stone’s throw away from where Wi’am is now located is no accident of history. Jesus, the hope for the world, was born in Roman-controlled Palestine; he grew up in Nazareth, an impoverished backwater town overshadowed by Sepphoris, the most important economic center of Herod Antipas; he carried out his ministry in the Galilee, an agricultural region crippled by heavy taxation and an enormous wealth gap. Jesus lived, healed, and was resurrected in a place just like modern day Bethlehem. For Zoughbi and Tarek, that made all the difference – and it should make all the difference for us, too.

If you ask me how to heal the social fabric of our church and country, I’ll be quick to tell you I don’t know. But at the same time, I’m convinced that there’s no way forward without pursuing authentic relationships with our enemies, seeing injustice through the eyes of empathy, and being rooted in an audacious hope in Jesus.