Posted on October 18, 2016 in Recent News
Authored by Macedonian Ministry 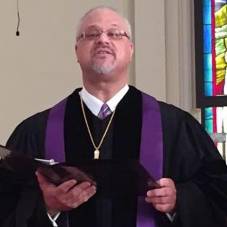 I’m a Christian. I believe God became a human being in Jesus Christ to save sinful humanity. I’m a pastor. I serve a small Presbyterian congregation. I’m a partner. I’ve experienced a long marriage, its breakdown, and the mercy of new love. I’m a parent of two lovely daughters and a fine son. I’m a grandparent of two fantastic boys. I’m a teacher. I’m in my fourteenth year as a college professor. I’m an African American. I’m a descendent of the enslaved and segregated. I’m a Southerner. I grew up in Memphis and I reside in Tuscaloosa. I’m a connoisseur of the Blues, barbecue, and SEC football.

I hope you can see we share experiences and values. This is important because you and I may part ways as you continue reading. You see, I’m also a political progressive. I’m usually in favor of social reform. I advocate for the extending of rights and opportunities to those lacking them. I believe our society can do more for those lagging behind or left out. In fact, my Christian faith pushes me in this direction.

These examples tell me that God has progressively revealed God’s love through the Scripture (Heb 1:1-4). Yet, God’s people have had a hard time figuring out the implications of this truth. We see this as Jesus engaged in repeated conflict with religious leaders. They were prone to read the Bible restrictively, but Jesus often offered a more expansive perspective (Matthew 23; Mark 7; Luke 20; John 5). Similarly, as the disciples discern God’s will in the book of Acts, they conclude that God’s kingdom included those formerly excluded (Acts 10; 15).

On the other hand, there were Christians arguing against these positions. They contended that God’s will is represented by the Golden Rule – “Do to others as you would have them do to you” (Matt 7:12). They practiced an interpretive approach I call, “Principles through Particulars.” They applied it to hotly contested issues like science, slavery, segregation, and sexism. These Christians believed they were extending the redemptive trajectory of Scripture. They believed that if the Bible presented the progressive expansion of God’s kingdom, then that past also provided a principled basis for extending rights and privileges in the larger human society.

This understanding of Holy Scripture and recent human history plays a significant role in why I’m a political progressive. Of course, there are many issues that are not easily settled by this brief overview. This certainly doesn’t decide whether one votes for one party or the other; this candidate or that one. Still, this framework functions as a general guide and it often leads me to the middle or to the left on the political spectrum. If you disagree, I hope you can at least have some empathy for a fellow believer who sees the relationship between faith and politics through this lens. May each of us strive for faithfulness so that Christ does not say to us, “You are wrong, because you know neither the Scriptures nor the power of God” (Matt 22:29).