For me, one of the most striking images of the Civil Rights movement is the photograph below. 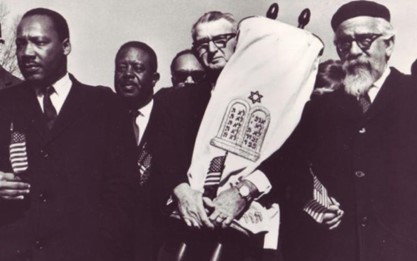 It’s from the march from Selma to Montgomery, March 1965. On the far left is Martin Luther King, Jr. and on the far right is Rabbi Abraham Heschel, one of the most influential Jewish theologians of the 20th century. In between is Rabbi Maurice Eisendrath, leader of American Reform Judaism and a non-violent activist. Rabbi Eisendrath carried a Torah scroll the entire march, with the mantle (covering) of the scroll prominently displaying the Ten Commandments.

For MLK, Eisendrath, and Heschel, the struggle for equality and justice was deeply rooted in and emerged out of the ethical parameters of the Old Testament / Hebrew Bible. Despite their different social locations and religious backgrounds, these reformers found common ground, especially in the writings of the prophets.

This is hardly surprising. The prophets are well known for their fiery words, their unwavering commitment to the poor and vulnerable, and their resolve to bring grief and pain into public expression. But what was especially influential for Heschel, King, and Eisendrath is the way the prophet’s perceived God’s relationship to the world.

Unlike ancient Greek philosophers (or most Protestant theologians), the prophets did not perceive of God as an abstraction, a powerful idea or entity that, while sovereign and just, stood at a distance from the realities of the world. The prophets, in contrast, found in God a deep sense of pathos.

Divine pathos is a key idea in the writings of Heschel. He describes it as the way in which God is affected by the brokenness of the world. The God of the prophets is one who is vulnerable, who participates in the grief of those who suffer, and whose primary response to injustice is not anger, but anguish. The God the prophets proclaim, as Heschel puts it, “is not the Remote One, but the One Who is involved, near, and concerned.”[1]

Isaiah 42 provides a striking image of divine pathos in action. The exile is coming to an end, and the prophet has new things to declare (v. 9) and a new song to sing (v. 10). But this song is one filled with pain and pathos. The LORD declares,

now I will cry out like a woman in labor,

Here the prophet pictures God as a woman in labor. The miracle of birth is accompanied by excruciating pain. God feels and bears that pain, crying out for relief that is not yet in reach. In actual labor (so I’m told), gasping and panting is a way of controlling the pain and relaxing muscles and the mind. So it is with God. The pain of bringing forth something new is real and visceral. It must be managed and moderated as much as possible. It cannot simply be willed away.

The God of Isaiah 42 is vulnerable. She suffers. She feels pain. She groans and gasps. Filled with pain and pathos, this God labors in service of life. What motivated Heschel, King, and Eisendrath to labor for justice in the 60s was not a commitment to an abstract principle or even a feeling of righteous indignation. It was their deep awareness that God labored beside them, suffered with them, and shared in their brokenhearted-ness.

The idea of divine pathos should remind us that God does not stand idly by as we labor to make things right in the world. God is not off on the sideline, impatiently tapping his foot waiting for us to finally sort out how to make our churches thrive again. According to the prophets, we are not alone. God is intimately wrapped up in the work and pain and anguish of bringing forth something new.

The pain we often feel in ministry is thus not something beyond the grasp of God. It’s not a sign that we are in the wrong line of work. According to Isaiah – and Heschel, King, and Eisendrath – this pain is something God, as a woman in labor, has experienced and is experiencing. This doesn’t make the pain go away. But it should remind us that we are not alone and that something new is about to be birthed.